"This is a new millennium, a new age, one in which Art need no longer do battle with Science. Instead of existing in opposition, a beautiful synthesis between the two can be achieved."
--quote from the Agora Gallery, New York City 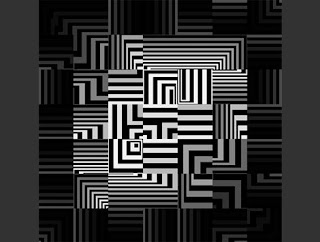 Vlatko Ceric is an abstract artist from Zagreb, Croatia who specializes in computer modelling. His genre is classified as "software art" or "algorithmic art" because the art is generated from computer algorithms that he writes. To describe the process, Ceric explains that he puts his ideas into the code and the computer uses that code to display the his ideas. In this way, he utilizes the computer not only as a creative medium, but as a way to create the art in a way that he may not have initially envisioned or imagined. None of this algorithmic art is modified after-the-fact by programs like Photoshop or Illustrator, so they are presented in their most pure format.

I came across this piece from his Labyrinth Collection and found it to be intriguing in many ways. Initially, it is fun to look at because of its “optical illusion” appearance, but the more I examined it, the more I found in it. The piece, like most of Ceric’s work, was generated directly from an algorithm. There is a calculated simplicity in each individual square, but the complexities of the “labyrinth” arise from the combination of the smaller squares. When I look at the piece, I find myself connecting emotionally with it, which to me is a commentary on our ability and need as humans to create meaning from artwork. The piece was created from an algorithm, which is an unthinking analytical procedure; and yet I still feel connected to the image and amazed by it. According to the Agora Gallery in New York City: “There is a spirit inside the machine, and Vlatko Ceric has freed it.” I wouldn’t necessarily agree that there is a spirit inside the machine, but I do think it’s incredible that Ceric can use the machine to embody his own ideas and spirit, and translate that into something that other people, like myself, can find meaning in.

Either way, the fact that something so aesthetically beautiful can arise from a mathematical model goes against traditional perspectives on computers and algorithms. Ceric’s work shows that the marriage of creativity and analytics can give rise to some truly beautiful creations.

Here is Ceric’s website: http://www.vceric.net/
I originally found this piece on rhizome.org: http://rhizome.org/artbase/artwork/42401/

Posted by alidigitalmedia at 9:02 PM